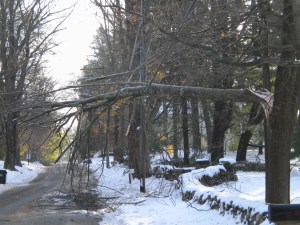 By now, most of the US knows about the damage caused in the Northeast by Winter Storm Albert. On October 29th, the entire state of Connecticut was WWF’d by a heavy wet snow. That night tree limbs snapped with M80 sound effects. By morning, residents were powerless-literally and figuratively.

Teachers, like their students, generally love a snow day. A sudden snowstorm can provide an opportunity to grade a stack of papers, plan lessons, or catch up on reading. A snow day grants a leisurely reading of the morning paper and an extra cup of coffee. A snow day permits the wearing pajamas and and the testing of a new soup recipe. A snow day is a collective opportunity to “catch one’s breath.”

Unless the power goes out. Winter Storm Albert knocked out the power in our area for five…six…seven…eight days, depending on the local street address.

Of course, when the power goes out, the sudden separation from all modern conveniences seems to put the 21st Century brain on hold. Habits of convenience, the flicking of on/off switches or pushing reheat on microwaves, are hard to break. But I have discovered that the disconnect from the Internet, however, is almost intolerable…particularly if one lives in an area without cell towers for 3G, and the power, phone and cable lines are down.

The storm came at the end of a marking period, a time when there is always too much to do, and I had no access to any student work. I found myself driving many, many miles out of town to set up in areas of the state, and out of state, that had power and free wi-fi. I scouted and found seats in malls, Panera’s restaurants, Starbucks, and 24-hour diners. Once I found the free wi-fi, I would set up my computer and read student work. I was not alone. I met many teachers who have also moved student work into a digital format who were in search of a signal in order to stay on track with student work. Several woefully admitted that they actually longed for a pile of actual papers to correct. The expression “digital divide” took on new meaning; we were divided from our students’ work in cyberspace.

When school reopened this past week (11/7), I was already behind. I had lost precious classroom time, but that time will be recovered by adding more five school days to the calendar, the harsh retribution for the aforementioned pleasures of a snow day. I mourn instead grading and planning time that was lost due to a growing dependance on the Internet.

The use of technology in the classroom is required in education; all students should be engaged in 21st Century skills. There are standards developed by the International Society for Technology in Education (ISTE) that must be met in districts throughout the state. My lessons almost always require some form of technology, from word-processing to Internet research. The assignments that can be create with technology are engaging, and the use of technology to post assignments can promote student independence and responsibility. Technology in the classroom is necessary if teachers are to prepare students for the future…unless the power goes out, and the Internet is not accessible.

The use of technology in the classroom will certainly increase as the amount of technology adults and students use in the real world is on the rise. These trends will not change, but some consideration should be given to the perplexing problem of what happens when the power goes down for an extended time. How can the business of educating students continue without the hiccups caused by Mother Nature?

Winter Storm Albert may be the harbinger of winter in the 2011-2012 school year and for those school years yet to come. There will be snowstorms, hurricanes, and other natural disasters in our state’s future that will separate students and teachers from the technology that joins them in 21st Century education.

And when that happens, when the power goes out for an extended time, I find myself parodying Shakespeare’s interpretation of the 15th Century Richard III. There I am, struggling along on my snow-covered Bosworth Field crying out, “A signal! A signal! My kingdom for a wi-fi signal!”