Comic Con is Really Literacy for All

In contrast there were thousands of attendees to the Rhode Island Comic Con dressed as Speed Racers, Waldos, Power Rangers, Luke Skywalkers, Hulks, Green Honets, Spidermans, Ghostbusters and others. These attendees were easily identified by masks and spandex.

As I approached one of the ballrooms, a pair of ninja-attired ushers looked me up and down, and without a word pointed me to the left lane, down the “boring” hallway.

Was my dress that obvious? I looked around. My brand? Coldwater Creek. Their brand? Marvel.

I walked past the long lines of patient Comic Con attendees; spandex, glitter, togas, masks, and capes abounded. I heard an announcement, “Jedi training in this room!” Jedi training? I looked at my program to the upcoming session I would be attending: Writing the Persuasive Essay. Jedi training looked far more interesting.

And then it hit me. There is a deep bond between the educators who busily rushed from session to session with oversized bags and the strutting costume clad participants who preened through the lobbies. There is a literacy foundation for both conventions. Everyone in the convention center was there because of the power of story.

Comic Con celebrates of the characters of stories; stories are the ways educators build literacy.

Yes, the love of story is what drew two unlikely groups together. The love of story transcended age and wardrobe…I looked around with new perspective. These were my people!

Throughout the day, we shared the same lobby areas and escalators…Pincachu in front of me, Katniss behind me.

“Look,” I remarked as we got off at the top floor, “It’s the Red Power Ranger!”

“That’s Deadpool,”  the young man behind me sneered. I tried to laugh off my error, but I had obviously touched a nerve.

“I stand corrected,” I apologized.

This is Deadpool…NOT the Red Power Ranger.

I quickly looked up up Deadpool. According to the Marvel Universe website, Deadpool (aka Wade Winston Wilson) is an anti-hero, a disfigured and mentally unstable mercenary whose power is an accelerated healing factor,which provides him with regenerative healing powers for all known diseases including cancer. He first appeared as a villain in The New Mutants #98 (Feb. 1991). Deadpool’s complicated back story alternates from a possible genesis as character with a stolen identity or as the crazed son of a war hero. Reading his lengthy biography is as challenging as some classic literary texts. Deadpool‘s history is as complicated as Shakespeare’s Richard III, Mary Shelley’s Monster, or Emily Bronte’s Heathcliff…all classical anti-heroes.

While I am familiar with each of these literary characters, I simply did not recognize many of the costumes that passed me; my literacy level for Comic Con was seriously limited. I reflected how regularly, and with the same disdain as the young man so boldly corrected me, I had regularly corrected anyone who was mistaken about the relationship of Oedipus to Antigone (“He’s her father AND her grandfather”) about Romeo to Juliet (“She’s a Capulet not a Montague!”) or for George to Lenny (“Remember? Lenny needs George as a protector!”). Now I was the one at a loss for identifying characters or relationships.

Sadly, I was Comic Con illiterate. Apparently, so are many of my fellow educators, but that is changing as research is demonstrating the growth of the literacies associated with graphic novels, comic books, and video games. Several studies are collected in The Handbook of Research on New Literacies edited by Julie Coiro (‪Taylor & Francis, 2008)  Chapter 23 is titled A Literacy of Expertise by Kurt D. Squire and features a study at University of Wisconsin-Madison.

As critics lament the “decline of the book” (with Harry Potter presumably not counting as literature), those few scholars who have touched video-game controllers are noting that games are surprisingly long, difficult, and complex,requiring and developing new digital literacies” (246).

Perhaps the alarm bells sounding the decline of “reading” do not signal a “loss” of literacy, but the emergence of a new constellation of literacy practices that could someday transform our social institutions. If the history of media holds true, video games, like film or television, are not going to replace books but live along side them.  (666).

In the article, When Gaming is Good for You (3/5/12) on the Wall Street Journal online edition explained how  researchers at Michigan State University’s Children and Technology Project reported on a three year study of video games:

491 middle school students found that the more children played computer games the higher their scores on a standardized test of creativity—regardless of race, gender, or the kind of game played. The researchers ranked students on a widely used measure called the Torrance Test of Creativity, which involves such tasks as drawing an “interesting and exciting” picture from a curved shape on a sheet of paper, giving the picture a title, and then writing a story about it. 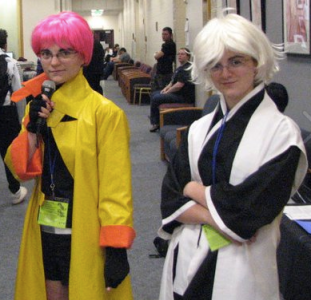 Lucy and Sarah, my nieces, at a Comic Con in Idaho. Their literacy levels are off the charts!

I should be more aware of the significant contributions that these new literacies are having on my students. I also should have been more prepared for the epiphany I experienced at this aptly named Literacy for All conference. My own nieces, Lucy and Sarah, participate regularly at Comic Cons organized in Idaho. Both young women are articulate advocates for anime characters and transform themselves in appearance and attitude. The reading level of some of their texts? 11.8 lexiles. The enjoyment they receive from sharing their knowledge with other like-minded people? Priceless.

The floor lobby areas of the convention center were probably more accurate in reflecting the literacy of today: traditional literacy standard bearers milling about with highly engaged new literacy consumers. These newer literacies may not be for all of my students, but the literacy demands on students who are involved in video games, graphic novels, comic books should be recognized. While teachers may not adopt the spandex, we all understand the importance role of story in our lives.

Who knows if there would be another convergence of the twain at the Literacy For All in future years, but I would like the opportunity to see what that Jedi training is all about.

UPDATE: I stand corrected, yet again. My niece Sarah communicated the following:

“Tell her that was at Fandemonium, in Idaho, not Comic Con, it’s TOTALLY DIFFERENT!”

2 responses to Comic Con is Really Literacy for All