Our English II World Literature course complements the World History course, so when the students are learning about the Industrial Revolution, our English course has students read the opening chapters to Charles Dickens’s Oliver Twist.

Reading Dickens, however, is a challenge for many students, particularly if they lack background knowledge on the story’s setting. In order to help them better understand the context of England during the Industrial Revolution, we incorporated several famous paintings to illustrate the shift from the pastoral setting to the urban setting.

Rather than show a painting in its entirety at first, we made screenshots of different sections of each painting and had the students “read” what they saw. For example, we began with John Constable’s painting The Hay Wain (1821) which hangs in the National Gallery in London, England.

Students looked at the information communicated in the upper left quadrant  of the painting and discussed the architecture of the roof and the large empty tree branches. They noted the gathering storm clouds in the background; “a tone of danger” noted one student.

We then had students look at the lower right quadrant of the painting where a farmer’s cart was being driven along a stream bed. They noted the details of the team of horses and speculated as to why the men would be walking upstream.

They speculated that there might be no road because a road might not have been necessary if transportation was easier by water, and one student called attention to a small canoe on the stream’s bank. They called attention to the earth tone colors that contrasted with the red harnesses of the horses.

Then we showed the students the full painting. 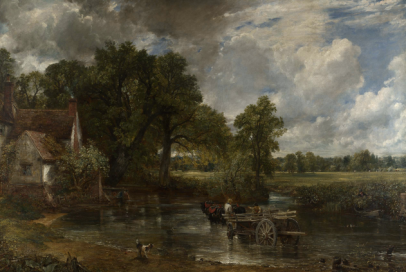 Constable’s painting is based on a site in Suffolk. The hay wain, a type of horse-drawn cart, stands in the water in the foreground. (National Gallery Picture Library
St Vincent House, 30 Orange Street, London)

When the students saw the entire painting, they were already familiar with some of the smaller details. They were able to locate these smaller details and suggest how they contributed to the larger “story” of the painting. They determined Constable’s painting celebrated the pastoral life outside London, a striking contrast from the setting of Oliver Twist where impoverished street children were placed in workhouses or recruited by criminals.

The painting that best illustrates the cultural shift caused by the Industrial Revolution, however,  is J. M. W. Turner’s The Fighting Temeraire. The oil painting depicts the gunship with her sails tightly wrapped to the rigging being tugged  by a steam powered paddle-wheel to the shipyard before being broken up for scrap. Turner painted the tribute to the end of sailing ships in 1838, the same year that Dickens published Oliver Twist. Both works brought attention to the drastic change in the way of life as a result of the Industrial Revolution.

Since the students had practiced close reading the Constable pastoral painting, they were ready to close read Turner’s painting. While some called attention to the the dirty smoke stack, others saw the energetic paddling as a sign of progress. One noticed the ghost-like ship hovering in the background; another noted a potential danger of a submerged obstacle in the foreground floating in the right corner of the painting. Most commented on the light created by the sunset which gave the painting “warmth”or “a glow” for some or a “light extinguishing” for others. When they were asked to use these elements as evidence to determine the artist’s message, there were some succinct responses:

Turner’s The Fighting Temeraire was voted England’s favorite painting in a 2005 poll organized by BBC Radio 4’s Today.  The painting was also highlighted in the recent James Bond film Skyfall. In the scene in the National Gallery, Bond meets his new handler, Q, while both sit on a bench opposite the painting:

Q: It always makes me feel a bit melancholy. Grand old war ship. being ignominiously haunted away to scrap… The inevitability of time, don’t you think? What do you see?
Bond:  A bloody big ship. Excuse me.
Q: 007. I’m your new Quartermaster.
Bond: You must be joking.
Q:  Why, because I’m not wearing a lab coat?
Bond: Because you still have spots.
Q: My complexion is hardly relevant.
Bond: Your competence is.
Q: Age is no guarantee of efficiency.
Bond:  And youth is no guarantee of innovation.

After watching the film clip, the students were in agreement that they are living in a new digital revolution, and that technology has changed their culture from that of their parents. If they want a sunset, they don’t need a painting by Turner….they have Instagram.