An Irish #PoetryFriday with a Seamus Heaney Sonnet

The poems of Seamus Heaney get a great deal of attention in mid-March probably because everything Irish gets attention around St. Patrick’s Day (March 17). Heaney is well represented in our curriculum; we read his Beowulf translation in grade 10. This Nobel prize-winning interpreter,, playwright and poet passed away in September 2013, leaving a legacy he described as one of “…words as bearers of history and mystery.” 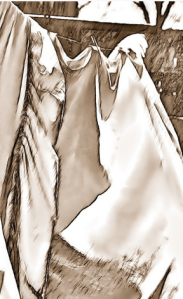 I taught his Sonnet, In Memoriam M.K.H., 1911-1984 to my Advanced Placement English Literature class this week. They listened first to hear him read the poem: (NOTE: be sure and listen to the little comment about “x’s and o’s” he makes at the end)

The cool that came off the sheets just off the line

Made me think the damp must still be in them

But when I took my corners of the linen

And pulled against her, first straight down the hem

And then diagonally, then flapped and shook

They made a dried-out undulating thwack.       (sonnet continues…..)

This past week has been “Sonnet Hell Week” where I teach my students to read, analyze, and then respond in draft form about a selected sonnet in preparation for the exam this coming May. This kind of exercise has the potential to poison anyone’s love for poetry, and they had written several essays before getting to this poem.
Despite the danger, I was confident that Heaney’s poem could withstand even the most jaded 2nd semester senior’s interpretation.

“I like it,” was the collective sentiment. These lines from a few of their quick draft essays reflect their appreciation:

Heaney uses comparisons to tell the reader that folding sheets makes him feel like his wife is still around, as the two end up “hand to hand” just from folding alone.

He describes their romance in moves when he was “x and she was o”…XOXO commonly represents hugs and kisses, creating the heartfelt connection.

This touching and pulling away symbolizes her physical existence on earth and her abrupt departure through the onomotopoeic “thwack.”

Just like the finality of the chore of folding sheets that they used to do together will never stop being a chore, she is forever present. She is in every fiber sewn in the sheets, every old flour sack used.

He must face the perils of household chores without help, endure his worst fears without his best friend. He must make his bed and sleep in it too.

This Poetry Friday is being hosted at Rogue Anthropologist; go visit!

6 responses to An Irish #PoetryFriday with a Seamus Heaney Sonnet