Archives For Digital Pedagogies and Approaches to Media

Last month, I travelled to Minneapolis, Minnesota, to attend the 2015 National Council of Teachers of English (NCTE) Convention with two fellow teachers to participate in poster sessions under the topic Digital Pedagogies and Approaches to Media.

One of the poster session was titled  “Every Picture Tells a Story”  and offered by Catherine Flynn, the Literacy Specialist at the K-8 elementary school in Sherman, Connecticut. Her presentation promoted the use of art as a literacy strategy in English/Language Arts classrooms as well as other content area classrooms. She offered examples of lessons on using art to enhance academic background knowledge at multiple grade levels. Background knowledge is critical to improving literacy since students who literally have  “pictures in their heads” of an idea, time period, or event are better able to comprehend the pictures created by words in a text. Flynn illustrated how abstract concepts of point of view, context, and perspective can be made understandable by using art to engage students in conversations across time and place. She also provided viewers with research that supports the use of art  to improve student inferential skills and in analyzing interpretations. Her materials can be accessed on this Google Doc and she can be contacted through her Twitter:@flynn_catherine and her excellent blog https://readingtothecore.wordpress.com/

The other presentation was offered by Caitlin Pinto, a 7th grade English Language Arts teacher at Harry Bailey Middle School in West Haven, Connecticut. I had already posted about Caitlin’s presentation at Here We Go, Pinto. Her lesson had students respond to reading on social media platforms or using social media templates to develop many of the skills that we want our students: analyzing, summarizing, researching, and making text to text connections. The social media platforms she uses are familiar to students who can transfer the strategies of each and apply them to the more traditional roles in literature circles. Her Twitter handle is @cpinto_iteach.

Over 30 educators stopped to speak one-to-one with Catherine or Caitlin, and the conversations about the different lessons they taught were each several minutes long. Both were engaged sharing with peers for the entire 90 minutes.  Moreover, as an example of the effectiveness in using social media, a tweet I posted about Caitlin’s use of showing how she uses the Twitter format for some roles in literature circles has been viewed 1,677 times (see below).

A poster session is not given in a dedicated room. The number of people who stopped to talk, however, exceeded expectations. At each display, we received more response from attendees than several of the 20-minute presentations held elsewhere during the convention. In this context, poster sessions were great way for these new presenters to become comfortable and network personally with other teachers.

I have written about the word context and this convention in a previous post where I mentioned that the etymology of the word context comes from the 15th C. Latin contextus meaning “a joining together”. The word context was originally the past participle of contexere, which means to “to weave together,” from com- “together” + texere “to weave, to make”.

The poster sessions are an example of how teachers “join together” in opportunities to show how they “make” lessons that help students improve their literacy skills. Catherine’s lessons using art to improve student inferential skills and in analyzing interpretations and Caitlin’s lessons using social media to help students with analyzing, summarizing, researching, and making text to text connections are both evidence of how best practices can be shared peer-to-peer at the NCTE convention. 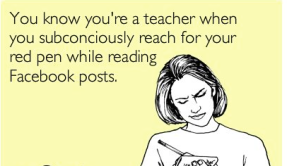 This third weekend in November is the traditional weekend for the annual National Council of Teachers of English (NCTE) Conference, and thousands of red-pen toting grammarians are descending on the city of Minneapolis!

My first time attending the NCTE Conference was in 2003 in New York City. I came back with new lesson suggestions, helpful tips on grading papers, and the names of fellow educators that have since grown into my own network of professional educators.

I came back inspired.

Since then, I have been fortunate to attend several other NCTE conferences as it moved annually to different cities across the country.  I even got the opportunity to present at conferences in 2010, 2011, and 2014.

This year I will be attending the NCTE conference with a young teacher from my district. Back in January, I submitted an engaging lesson that was created by English Language Arts teacher Caitlin Pinto, a 7th grade teacher from West Haven’s Harry Bailey Middle School.  That lesson was accepted as part of a session titled “Digital Pedagogies and Approaches to Media.”

In Caitlin’s lesson, the social media platforms that are familiar to students are incorporated as the traditional roles in literature circles: the Summarizer is reinvented when a student uses a Twitter template; the Connector is reconfigured when a student uses a Facebook template, the Researcher is expanded when the Pinterest template is followed, and the Illustrator is reimagined with the Instagram template

She will be bringing examples of how this approach has increased the amount that students write about the texts they read.
She will also be demonstrating how she works with students to improve the writing skills and processes that go into creating text.

Her students are excited that their “Ms. Pinto” will be a presenter at this conference. Her fellow teachers are cheering her accomplishment. Her administration is supportive, and her vice-principal even helped arrange for her conference expenses to be covered by the local Rotary Club.

I hope she will return with new ideas for lesson plans, perhaps with new tips on grading papers, and maybe even with her own list of fellow educators as she builds her own professional network.

I have experienced firsthand the power of the NCTE conference.

I know that Caitlin Pinto will come back to West Haven Bailey Middle School inspired.