What am I Missing with ‘A Separate Peace”?

The Simpson’s creator Matt Groening is a great satirist. In one episode in an exchange between the cartoon character Lisa Simpson and her Grandmother, he also demonstrates his ability to be a great literary critic: 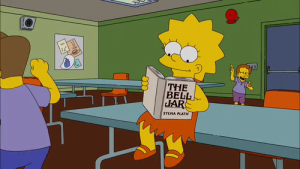 I value Lisa Simpson’s opinion on literature, after all, this is a character who has been seen clutching copies of  The Bell Jar, Ethan Frome, Man and Superman, The Corrections, and the more age appropriate Pippi Longstocking. So when she says she hates John Knowles, I feel validated. I have always disliked John Knowles’s A Separate Peace.
However, there are others who call this same book  “A masterpiece”(National Review) or ” deeply felt and beautifully written” (The Observer) or “Intense, mesmerizing, and compelling” (School Library Journal). The English Language Arts Common Core State Standards gives its recommendation since the novel has been, “Hailed as a literary masterpiece,” and that ” A Separate Peace is a classic novel with numerous teaching resources available.” The CCSS analysis of the text complexity reads:

“When considering the qualitative measures and the reader-task considerations, this novel is well placed at the 9th-10th grade complexity band. The complex themes, use of first person narrative—but with multiple flash backs and flash forward indicate higher level reading skills are needed by the reader. The Common Core Standards Text Exemplars also place the novel in the 9th -10th grade complexity band.”

“Rejected at first by American publishers, John Knowles’ A SeparatePeace appeared in England in 1959, where critics admiringly compared it to Salinger’s writings. American critics, responding in 1960 to the American edition, generally noted its depth, sensitivity, and ‘disturbing allegories'(Aitken 754). They did not entirely agree about what the allegories might be, nor have the four decades of critics since.”

I would argue there are no allegories in this short story “Phineas” that was expanded (unnecessarily) by Knowles into a full length novel. This is a fairly straightforward story of young white males at an exclusive prep school and their conflicts and competition during a last summer before entering the very grown up world of competition and World War II. I found the story dated when I read it in 1973, but Gibson felt the novel could  speak to today’s readers:

“As we approach the forty-fifth anniversary of the American edition of A Separate Peace,in a world where the all-male, all-white prep school environment has become exceedingly rare, John Knowles’ novel nonetheless continues to speak to adolescents. Once we fought wars against fascism, then against communism, now against terrorism. Before this background, teenagers attend school, bond with peers, lose their innocence, encounter hate and ignorance and what Knowles calls blind impulses; and each one inevitably struggles to develop an identity-sexual and otherwise. As the world continues to change, no doubt the next four decades of critics will have much to say about this resilient and compelling novel.”

“We do not love Phineas as Gene does. His charm for Gene exceeds his charm for us. The less we are seduced by Phineas, the more we experience him not as an Apollonian boy-god lacking the normal ratio of ill-character but as a love object for Gene, and Gene alone.”

I remember reading the climatic moment of the novel, when Gene reflects back on the accident in the tree:

“He [Phineas/Finny] had never been jealous of me for a second. Now I knew that there never was and never could have been any rivalry between us. I was not of the same quality as he. I couldn’t stand this. . . . Holding firmly to the trunk, I took a step toward him, and then my knees bent and I jounced the limb. Finny, his balance gone, swung his head around to look at me for an instant with extreme interest, and then he tumbled sideways, broke through the little branches below and hit the bank with a sickening, unnatural thud. It was the first clumsy physical action I had ever seen him make. With unthinking sureness I moved out on the limb and jumped into the river, every trace of my fear of this forgotten.”

“What the heck?” I distinctly remember thinking, “He intentionally caused him to fall! What kind of friend is that?” He lost me at “forgotten.” I considered the final “apology” of the novel a fraud:

“I never killed anybody and I never developed an intense level of hatred for the enemy. Because my war ended before I ever put on a uniform; I was on active duty all my time at school; I killed my enemy there. Only Phineas never was afraid, only Phineas never hated anyone.”

It’s a lie. Gene was responsible (indirectly) for the death of Phineas, and in this statement he is contradictory about killing his “enemy.” Apologetically glorifying Phineas at the end is probably meant to be sincere, but to me the conclusion reeks of Freudian dishonesty. Gene could never really know Phineas, so he destroyed him and then made him a god.
Still, our 9th grade honors classes read A Separate Peace.
When I asked the teacher why she replied casually, “Well, they can read it in a weekend. They like it.”
“Do you do any real lessons with it?” I pressed her.
“No. They generally get it.”
“Get what?”
“Friendship, betrayal. Teenage angst.”
Ah, yes. A Separate Peace is awash in teenage angst. So is high school, which probably is the reason the book remains in the high school canon. That and the accumulated hundreds of copies available in English Department libraries. Of course, this wallowing in the imposed angst of teenagers reminds me of another brilliant Matt Groening observation, this time provided by Lisa’s brother Bart. Heading into an alternative rock and roll concert, Bart is heard commenting, “Lisa, making teenagers depressed is like shooting fish in a barrel.” Which explains why Lisa hates John Knowles.
Me too.

7 responses to What am I Missing with ‘A Separate Peace”?