Reading “Girl Sleuth: Nancy Drew and the Women Who Created Her”

“Are you upstairs hiding with a book?” my mother was exasperated as she called up the stairs.
“No-oo..” I would reply, stashing the copy of The Sign of the Twisted Candles, The Password to Larkspur Lane or The Secret in the Old Attic under the covers.
My mother would be looking for me for some chore I had left undone, but the lure of those yellow-spined mystery books was so hard for me to combat. I would succumb and lose track of time, and responsibilities, the minute I picked up one of the mysteries.

I was Nancy Drew addicted.

From the day I found my first copy at age eight under the Christmas tree, I read every Nancy Drew title available, a total 46 titles by the time I completed eighth grade.

“So, how’s that little blue roadster?” my father would ask, passing me while I was lost in a mystery.
“Oh! You are going to ruin your eyes,” my mother would complain finding me reading by hall light.

The contradictory message from my parents to read or not to read while feeding my addiction with new editions of Nancy Drew for birthdays and other holidays only heightened my regard for the series. Nancy Drew was the dessert to my reading diet, the forbidden fruit during Saturday chores, the delicious temptation to finish “just one more chapter” before falling asleep. 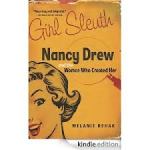 So, I was delighted when at a public library book sale I came across a “used” brand new copy of Girl Sleuth, Nancy Drew and the Women Who Created Her by Melanie Rehak.

Here was the story of Nancy’s origins, the brainchild of Edward Stratemeyer (1862-1930) who developed and ran a syndicate of writers of children’s fiction. I have only recently come to understand how much Stratemeyer influenced generations of young readers, myself included, by producing book series specifically geared to their interests.

He created the Tom Swift and The Hardy Boys series. He was responsible for the adventures of Nan, Bert, Flossie and Freddie in The Bobbsey Twins. Early in his writing career, Stratemeyer recognized that writing under different pseudonyms and with different publishers, he could offer more books each year. Unable to keep up with the demand for his stories, he began to outsource his work by hiring writers to complete stories he had outlined. By 1905, his book publishing syndicate mirrored the Henry Ford model of assembly linewriting; Stratemeyer editing the work of other writers who filled in the details from his summary notes.

It was Edward Stratemeyer that conceived of the young girl detective, and he developed five plots that he could offer a writer who could meet his exacting standards. Originally, the character Nancy Drew was named Stella Strong, and one of the plots that Stratemeyer developed was for Stella Strong at Mystery Towers:

How Stella visited the old Tower House and met the rich and eccentric maiden ladies, Patricia and Hildegarde Forshyne, who were much disturbed by unusual happenings about the place. She learns that some relatives are trying to get possession of the Forshyne fortune  Stella was once made a prisoner, but turned the tables and made a startling exposure (112).

Stratemeyer suggested other names for his new sleuth: Nell Cody, Nan Nelson, Diana Dare, Helen Hale, Nan Drew. The decision to expand Nan to Nancy was made by the publishing company Grosset & Dunlap who were enthused by this chance to have books for the growing market for young female readers. Stratemeyer had already decided that the pseudonym Carolyn Keene would be used for the series; each book would sell for fifty cents with two cents royalty going to his syndicate. From a number of applicants, he selected Mildred Wirt Benson, a “convention-flouting journalist” and agreed to pay her $125 for each manuscript (114). She, like all other writers in the Stratemeyer syndicate, signed away all rights to the stories and character.

Rehak’s extensive research clearly shows that Wirt was responsible for developing the character of Nancy Drew from the beginning. When Edward Stratemeyer passed away suddenly after the launch of the first Nancy Drew mystery, his daughter Harriet Stratemeyer Adams, took over the editing and eventually, the supervision of all things Nancy Drew. It was Wirt, however, who fleshed out the Nancy’s character against the backdrop of the Great Depression in 1930. Her Nancy was popular in school with two devoted friends, Bess and George. She was intelligent and attractive, moving stylishly between tweed suits and a “party frock of blue crepe which matched her eyes”. Blue was also the color of her little shiny roadster, a gift from her supportive father, Carson Drew. The mother figure, housekeeper Hannah Gruen, was also Wirt’s idea; the boyfriend Ned Nickerson came later in the series.

In recounting the success of the Nancy Drew series, Rehak notes that Wirt “later confessed  that Nancy Drew was “everything she -or any girl, in fact-wanted to be, and then some” (117). Rehak’s recounting of the success of the series is dampened by the deteriorating relationships in the Stratemeyer family, reduced pay for Wirt, and Harriet’s demands to keep the syndicate’s ghost writers from claiming their authorship.

Rehak also explores the other media ventures that featured Nancy Drew: TV series, movies, graphic novels, and a sordid connection to Playboy magazine.  Harriet’s control of her family’s publishing company’s intellectual property kept many of the writers like Wirt from claiming authorial attribution.

Subsequent revisions of Nancy Drew get less exploration by Rehak, who has little praise for the “loud flashy plots and clothing and crushes” that recent publishers have tried in order to “revamp the sleuth” (311). Nancy Drew’s back story is well organized by Rehak and a must read for all her fans who knew that it was not the plot that made the book exciting, but rather the “pleasure comes from her [Nancy Drew’s] autonomy, her taking events into her own hands”(307).

Rehak concludes with the feminist view that Nancy Drew was a guide for the ages as many of the problems for women (equal pay, inadequate day care, etc) still exist:

Thanks to Mildred and Harriet and the generation of women and girls who glimpsed in Nancy Drew a vision of what they might be someday, it doesn’t look like the sleuth is going away anytime soon, which is a good thing. There are fighting days still ahead of us, and we’re going to need her (314).

Perhaps this is why my memories of Nancy Drew are so salient, and my addiction forgivable. While my chores waited, Mildred Wirt Benson and Harriet Stratemeyer Addams offered me, and thousands of young girls like me, a role model.

So, Mom, I really was not hiding upstairs with a book…I was growing up.

3 responses to Reading “Girl Sleuth: Nancy Drew and the Women Who Created Her”