Why They Remember Witnessing 9/11

15 years ago the World Trade Center Twin Towers in NYC were struck by terrorists. When they collapsed, many students at Brookfield High School in Connecticut watched them fall -75 miles away-on television screens set up along the walls of the school’s library media center.

Those students did not attend classes. Instead, they had the opportunity to be witnesses to history. They were given this opportunity to stand as witness to the tragic events that happened because of a decision made by the school’s library media specialist (LMS), Sydnye Cohen.

The role of the school librarian had radically changed beginning in the 1980s and Sydnye was a library media specialist who had trained to be at the forefront of that change. I was an English Language Arts teacher at Brookfield in September of 2001, and I had developed a great respect for her. She had encouraged me and other members of my department the previous year to incorporate technology in our lessons. She had guided us to embrace a broad range of digital tools and instructional materials.

Sydnye was confident. She was knowledgable. She was fierce in her convictions.

I remember that on that morning of September 11th, the students who had heard about the attack gathered in the school library where Sydnye had decided, with support from the school administration, no doubt, to set up the school televisions.

That morning, Sydnye did not waver in her role to provide critical information to the high school students. I remember that she did not appear to be concerned about the impact her decision to stream the live footage into the school might have. I believe I may have said something about what parents might think; I believe she shrugged off my remark.

The students watched minute by minute, even as the Twin Towers burned and then crumbled into rubble on the NYC streets.

Her conviction to have students witness this event was based on her desire not to shield students from this man-made disaster, but to give them first-hand information.

Fifteen years later, I have noted a number of posts and news articles that ask the question:

SHOULD STUDENTS SEE THE GRAPHIC IMAGERY OF 9/11?

Several of these articles mention concerns raised by secondary school teachers today. Many high school students in 2016 could be seeing the raw footage from 9/11 for the first time. Our current 24-hour news cycle was just beginning, and Fox News and MSNBC were only five years old. Their coverage of the event streamed into the school live….unedited. Years later, the recordings are difficult to watch.

When today’s teachers tackle the topic of 9/11 in the classroom, they may feel a personal responsibility to educate students about the event, but they may also feel concerns about the impact of these videos.

The students at Brookfield High School had their LMS take on that responsibility that morning. Sydnye Cohen had every confidence that giving students the opportunity to see the events of 9/11 was historically important.  She was fierce in her conviction that witnessing this event would be important for them to become critical thinkers.

The students who sat in the library media center in Brookfield High School will clearly remember 9/11, because their library media specialist gave them that opportunity.

Terror, Terrorism, and the Teaching of Social Studies

“We are not used to live with such bewildering uncertainty,” wrote Jessica Stern in a New York Times editorial How Terror Hardens Us on Sunday (12/6/15) after the San Bernardino, California, shootings.

Stern, an adult, was writing about adults collectively when she used the pronoun”we.”

That same bewildering uncertainty also confronts our children, our students in schools. That bewildering uncertainty is happening at a vulnerable time, just when they are just learning to be citizens in our democracy. That same state of terror, a state of intense fear, has an impact on their state of mind as each terrorist attack, Stern notes, “evokes a powerful sense of dread.”

Stern, a professor at Boston University’s Pardee School of Global Studies, co-authored ISIS: The State of Terror. She noted in her editorial:

Students in our classrooms today attend schools where terrorism or home-grown violence is a possibility; the term “lockdown” is part of their vocabulary. At every grade level, they have every reason to believe that they could be a target audience. while motives for violence have differed, many students are aware that high-profile incidents have happened in schools: Columbine (1999) and Sandy Hook (2012).

As educators in all disciplines at every grade level struggle to help students deal with recent events that are identified as terrorism, perhaps the discipline of social studies is the subject where educators can best counter a terrorist’s goal to have our students “afraid and overreact in fear.”

That academic responsibility to help students cope was claimed 14 years ago by the president of the National Council of Social Studies (NCSS) in 2001, months after the attacks on the Pentagon and the Twin Towers at the World Trade Center. 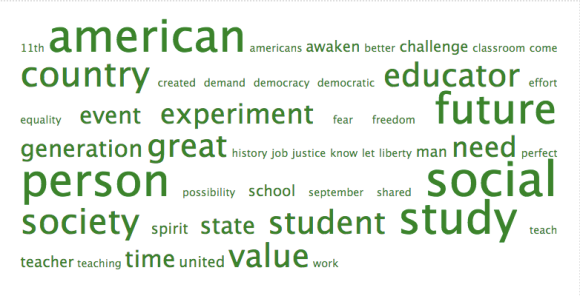 The most frequent words enlarged from the speech given by Aiden Davis, President of National Council of Social Studies after 9/11/2001 (www.wordsift.com)

When Adrian Davis delivered his 2001 NCSS Presidential Address to the nation’s social studies teachers, he explained their role as educators included efforts to “to work to reconstruct schools to become laboratories for democratic life” by saying:

“Schools do not exist in a vacuum. They are not isolated from their neighborhoods and communities. Schools and teaching reflect society, and they participate in constructing the future society.”

When Davis gave this address, he was making the case that terrorism had made the discipline of social studies more relevant to future societies than ever before. He anticipated that there would be people who could “overreact in fear”; his address hoped to point out that students would need guidance so that democracy would survive the bewildering uncertainty after 9/11:

As social studies educators, we need to reinforce the ideals of equality, equity, freedom, and justice against a backlash of antidemocratic sentiments and hostile divisions. As social studies educators, we need to teach our students not only how to understand and tolerate but also how to respect others who are different, how to cooperate with one another, and to work together for the common good.

Davis’s concerns about teaching respect and how to cooperate are even more important today when there is heated rhetoric conflating terrorism with religion. His reason to encourage social studies teachers to reinforce the ideals of equality, equity, freedom, and justice provides a solution to the concerns in Stern raised in her How Terror Hardens Us.

Stern’s editorial concludes, “If we are to prevail in the war on terrorism, we need to remember that the freedoms we aspire to come with great responsibilities.”

On behalf of all social studies educators, Davis accepted those responsibilities. As he concluded, he made clear the commitment he was making for teachers, “We have an opportunity to teach the coming generations to preserve and extend the United States as an experiment in building a democratic community….teaching is where we touch the future.”

The future is always uncertain, but educators, especially social studies educators, can provide students the skills of citizenship to deal with uncertainty so that they will not overreact in fear.

Twelve years ago, I was teaching my Advanced Placement English class when word came that a plane had crashed into one of the Twin Towers in New York City. Several hours later, all classes were abandoned in the high school. A line of students formed in the office in order to call and know if family members who worked in NYC were okay.  Our school media specialist hooked up televisions around the walls of the library, and students sat on the floor in the middle; everyone was silent and somber. Teachers and students mingled together, some with arms around each other, watching the catastrophic events on that beautiful September morning when the blue skies belied the carnage happening less than 100 miles away.

In December that year, I took those same AP students to see Othello performed at The Public Theatre in downtown NYC. We arrived early enough, so I suggested to the other chaperones that we have the bus take us down to Ground Zero. We reasoned that students should have a chance to witness history.

We travelled downtown, past the business-as-usual activity of stores and heavy traffic. We turned down a side street when the “shroud” suddenly came into view. The mangled frame was eerily illuminated, bending over the dust created by the workers who were working late into the night dismantling the remaining structures of the two buildings. We got off the bus and walked along the chain link fences that were covered with sheets and banners bearing the names of those killed and the sentiments of others who had come down to witness the aftermath.

A policeman approached us. I stepped out to explain our presence, but he turned to the students and asked, “Are you here to sing for us?”
The students stood dumbfounded. Finally, one choked out a sincere response, “No, but we will if you want us to.”
He hugged her with his big arms. “It’s ok, honey,” he smiled sadly, “just coming here is enough.”
There was no question that Shakespeare’s tragedy took a backseat that night.

This year’s graduating class of high school seniors is the last class that experienced 9/11 while in school. They are members of the last class that shared their emotions with teachers who struggled that day to explain the unexplainable. They were in kindergarten that fall. Chances are they had no idea what was happening except that their teachers may have been agitated, emotional, or distracted that day. Throughout the school year, they may have asked their teachers questions about what happened. In all likelihood, their teachers struggled with prepared responses.

The events of 9/11 have been etched indelibly in the hearts and minds of teachers and students who shared that experience. Now, that last group is graduating school. In the future, students will learn about the events of that day in schools in various classes and through a variety of mediums, but they will not be able to say, “I remember, I was in school when…”.

One way they will learn about the impact of 9/11 is through poetry, and there are many poems written from different perspectives. Billy Collins’s poem “The Names” captures the loss of 2,763 individuals in the Twin Towers by using the names of 26, one for each letter of the alphabet, with the exception of the letter X -“(let X stand, if it can, for the ones unfound)”.

Television’s PBS invited Collins to read “The Names” on a broadcast September 12, 2012. The video and full text of the poem are on the PBS website.

BILLY COLLINS, poet (speaking): “The Names,” for the victims of September 11th and their survivors.

Yesterday, I lay awake in the palm of the night.

A soft rain stole in, unhelped by any breeze,

And when I saw the silver glaze on the windows,

I started with A, with Ackerman, as it happened,

Then Baxter and Calabro,

As droplets fell through the dark. (continued on Billy Collins’s website)

This graduating Class of 2014 is the last where teachers and students were together when the world changed. The images and the aftermath were part of their school experience in 2001. Together, they learned the fate of so many, as Collins says,

Names wheeled into the dim warehouse of memory.

So many names, there is barely room on the walls of the heart.