Math, Patterns, and MLK’s “I Have a Dream”

Today is the third Monday in January, a national holiday commemorating Martin Luther King, Jr., and if you have not already seen Nancy Duarte’s visualization of Martin Luther King’s “I Have a Dream” speech, then here it is below on YouTube (or the Vimeo link here):

If you have not heard of Nancy Duarte or how she happened on this form of presentation, here is the her TED Talk link. In this presentation, she explains how she compared the simple “structure” of a story as first suggested by Aristotle (having a beginning, middle and end) to the structure suggested by Gustav Freytag’s in his story “pyramid”.

You may remember Freytag’s structure as something called a “plot mountain” from 4th or 5th grade: 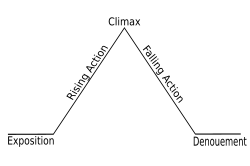 Freytag diagrammed the strict dramatic structure that the Roman critic Horace defined in his Ars Poetica:

“A play should not be shorter or longer than five acts”

Good drama, Horace maintained, is based on a five act structure with an exposition, a rising action, a climax, a falling action and a denouement (unraveling or resolution) of the story. Freytag’s model provided the visual to Horace’s critical analysis.

“I love this shape. So we talk about shapes. Story has an arc, well an arc is a shape. We talk about classical music, having a shapeliness to it. So I thought, hey, if presentations had a shape, what would that shape be? And how did the greatest communicators use that shape or do they use a shape?”

She wondered about this connection between story arc and how a presenter is the same as someone telling a story when she came up with the idea to overlay two great speeches to see if they followed the same story arc that Frytag suggested:

“So I took the obvious, I took Martin Luther King’s “I Have a Dream” speech, and I took Steve Jobs’ 2007 iPhone launch speech, I overlaid it over it, and it worked. I sat in my office, just astounded. I actually cried a little, because I was like, “I’ve been given this gift,” and here it is, this is the shape of a great presentation.

In her TED Talk, she explains how the shape of the both presentations follows the pattern established in Freytag’s pyramid.

It is Mathematical Practice Standard #7 (MP7) that connects to Duarte’s visualization of text. It states that students should:

Look for and make use of structure.

In explaining how “mathematically proficient students look closely to discern a pattern or structure,” educators are developing the interdisciplinary and cross-curricular skills required to discover the patterns in other subjects as well, the patterns in literature and the patterns of history.

In her analysis of Martin Luther King’s speech, Duarte brought attention to the patterns created through his figurative language: the call and response, allusions, metaphors, etc., and she lays them out in multi-colored vertical bars for audiences to see. There is a geometric shape, there are patterns, and so, there is math.

From speeches as stories, to stories as visualized patterns, and to visualized patterns as part of mathematical practice, helping students understand the structure of  Martin Luther King, Jr’s speech can help them better appreciate the brilliance of his craft in both creating and then in delivering his unforgettable message, “I Have a Dream.”