Archives For PreK-3rd and the CCSS 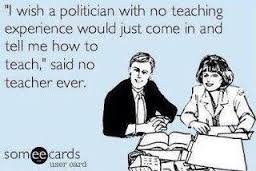 One of the underlying problems in educational reform today is that so few reformers have any hands-on classroom experience. Reading about teaching is academic and informative, but the hands-on experience of standing in front of a class of 9, 14, 24, or (heaven forbid!) 31 students at any grade level is irreplaceable. Developing lesson plans is an academic exercise, however monitoring and adjusting that lesson plan for real time problems (fire drill, student absences, material shortage, technology glitch) during instruction is irreplaceable. Reading assessment data is an academic enterprise, but understanding that data in the context of the classroom with all the personalities, abilities, disabilities, and socio-economic influences is irreplaceable. Hands-on experience should be a major factor in education reform, but the education reform efforts in the  Common Core State Standards (CCSS) have little to no classroom credibility.

A recent entry on Twitter from Randi Weingarten, current president of the American Federation of Teachers, was an attempt to address the classroom experience of the creators of the CCSS. Weingarten herself does have hands-on experience in the classroom, but that experience is spotty.  From 1991 until 1997, and with the exception of a six month full time teaching load in the fall of 1994, Weingarten taught on per diem basis (substitute?) at Clara Barton High School in Crown Heights, NY. Total experience? Six years, but this short experience is six more than many of the educational reformers who participated in the creation of the CCSS.

Weingarten tweeted the following on June 29, 2013:

Teachers were part of the development of #CCSS from the beginning http://youtu.be/y1DlNpaKW38

She was posting a link that was supposed to demonstrate that teachers, real classroom teachers with hands-on experience, had been involved in the standards from the beginning. The link led to a YouTube video featuring an ELL classroom teacher Lisa Fretzin who reflects how she “…was part of the review process starting in August looking at the the first draft”:

While Ms. Fretzin certainly has classroom credibility necessary for developing the CCSS, her participation was not exactly at the “beginning” of this process. According to her statement on the video, she was not present at the creation; she was asked to “review” which is different than “from the beginning”. Furthermore, her name is not on the list of participants who did create the CCSS for English Language Arts (or feedback group) which clearly identifies only four of the 50 participants (8%) as “teachers”. The remaining 46 participants (92%) are identified with titles such as: “author”, “consultant”, “specialist”, “professor”,  “supervisor”, “director” or “senior fellow.” In all fairness, perhaps many of these participants had worked in the classroom before moving into higher ranking positions as one would hope, but their hands-on classroom work experience is unclear.

The most glaring examples of classroom incredibility are the lead authors for the CCSS, Susan Pimentel and David Coleman; their collective classroom experience is zero. Pimentel has a law degree and a B.S in Early Childhood Education from Cornell University. Coleman’s, (termed “Architect of the Common Core”) classroom experience is limited to tutoring selected students in a summer program at Yale. He later founded Student Achievement Partners and is currently serving as the President of the College Board.

Weingarten must also know that classroom teachers for PreK-Grade 3 and grade level experts were not included in the creation of the CCSS at all. Many of these educators have express concerns that students are not cognatively ready for many of the standards in math and reading. Valerie Strauss of The Washington Post put up an editorial (1/29/13) “A Tough Critique of Common Core on Early Childhood Education” by Edward Miller, teacher and co-author of Crisis in the Kindergarten: Why Children Need to Play in School, and Nancy Carlsson-Paige is Professor Emerita of Early Childhood Education at Lesley University in Cambridge, Massachusetts and author of Taking Back Childhood. They note that when the standards were first revealed in March 2010, “many early childhood educators and researchers were shocked. “

The promoters of the standards claim they are based in research. They are not. There is no convincing research, for example, showing that certain skills or bits of knowledge (such as counting to 100 or being able to read a certain number of words) if mastered in kindergarten will lead to later success in school. Two recent studies show that direct instruction can actually limit young children’s learning. At best, the standards reflect guesswork, not cognitive or developmental science.

Miller and Carlsson-Paige also include links to the Joint Statement of Early Childhood Health and Education Professionals on the Common Core Standards Initiative and summarize their statement:

We have grave concerns about the core standards for young children…. The proposed standards conflict with compelling new research in cognitive science, neuroscience, child development, and early childhood education about how young children learn, what they need to learn, and how best to teach them in kindergarten and the early grades….

At all grade levels, therefore, there are concerns about how inclusive the creators of the CCSS were in engaging classroom teachers. The entire initiative, by its own admission, began politically, coming from the nation’s governors and education commissioners, “through their representative organizations the National Governors Association (NGA) and the Council of Chief State School Officers (CCSSO).”

Weingarten’s tweet was more than a little disingenuous when she indicated that “teachers were part of the development” when, to the contrary, there is much more evidence to prove that the ratio of teachers to individuals bearing education titles was disproportionate in favor of reformers and academics without classroom experience.

Real teachers, those with hands-on experience gained in the classroom, have had a limited say in the CCSS that they will be implementing day in and day out in their classrooms at every grade level. Excluding this important faction is why there has been pushback from teachers who recognize the difficulties in implementing many of the standards. Furthermore, there are growing concerns about the level of accountability for teachers in having students meet these same standards.

Ultimately, Weingarten should not tweet out misinformation about teachers developing the CCSS, especially when the evidence demonstrates that teachers were a only a tiny percentage in creating these standards. Weingarten must know that for any educational initiative to succeed, teachers must be engaged from the very beginning.

In these days of education reform, classroom credibility counts.