The Glass Castle-A Core Text for Memoir in Grade 12 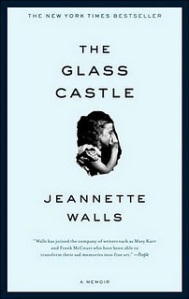 So, I distribute the books, and I read aloud the opening paragraph,

“I was sitting in a taxi, wondering if I had overdressed for the evening, when I looked out the window and saw Mom rooting through a dumpster. It was just after dark. A blustery March wind whipped the steam coming out of the manholes, and people hurried along the sidewalks with their collars turned up. I was stuck in traffic two blocks from the party where I was heading. Mom stood fifteen feet away. She had tied rags around her shoulders to keep out the spring chill and was picking through the trash. It had been months since I laid eyes on Mom, and when she looked up, I was overcome with panic that she’d see me and call out my name. I slid down in the seat and asked the driver to turn around and take me home to Park Avenue” (3).

That certainly caught their attention.

Jeanette Walls, author and gossip columnist for MSNBC, incorporates both the misery of living in a dysfunctional family with the excitement and joys of childhood in her page-turner of a memoir. Chapter Two opens with the deadpan line-“I was on fire,” where Walls mater-of-factually recounts how she was set ablaze by the fire on the stove while cooking herself a hotdog at the young age of three. Her resilience is remarkable, but more remarkable is her generosity in the remembering her father who  employed the “skedaddle” staying one step ahead of the authorities, who bestowed stars as Christmas presents, and who promised a home to his children -a glass castle. Similarly, the portrayal of her mother as an talented artist who prized independence and who believed that “being homeless is an adventure” is unflinchingly honest.

I first bought 20 copies of The Glass Castle three years ago at the retail price of $10.50 each. This memoir was one of the first offered in the newly designed Memoir Class, in fact, the course was built around the book as a core requirement. Since then, there have been some 30+ copies added ranging in price from $.50-$2.00 from used book sales. The total investment for the 50 copies now in the book room is about $250.00. The book’s popularity with area readers makes it relatively easy to find at Goodwill and public library book sales.

After the students were introduced to the book, I showed a short video of Walls with her mother. At first, several of my students were outraged that Walls would admit to avoiding her mother who appeared so desperate. Indeed that was Walls’s fear when she first drafted the memoir, but as the students read the text, they have become more forgiving and understanding. In the memoir parental failure was complicated by a toxic mixture of mental illness and alcohol, problems unfortunately not unknown to some of the students. The video helped to reassure them that Walls is not the heartless daughter they initially believed.

Walls is a great storyteller in the genre of non-fiction. Her episodes in the The Glass Castle recalls to mind the work of the great fiction writer Tolstoy who famously stated, “Happy families are all alike; every unhappy family is unhappy in its own way. ” Walls combines the happy and the unhappy in an engaging read….especially since there are seven months left in the school year.